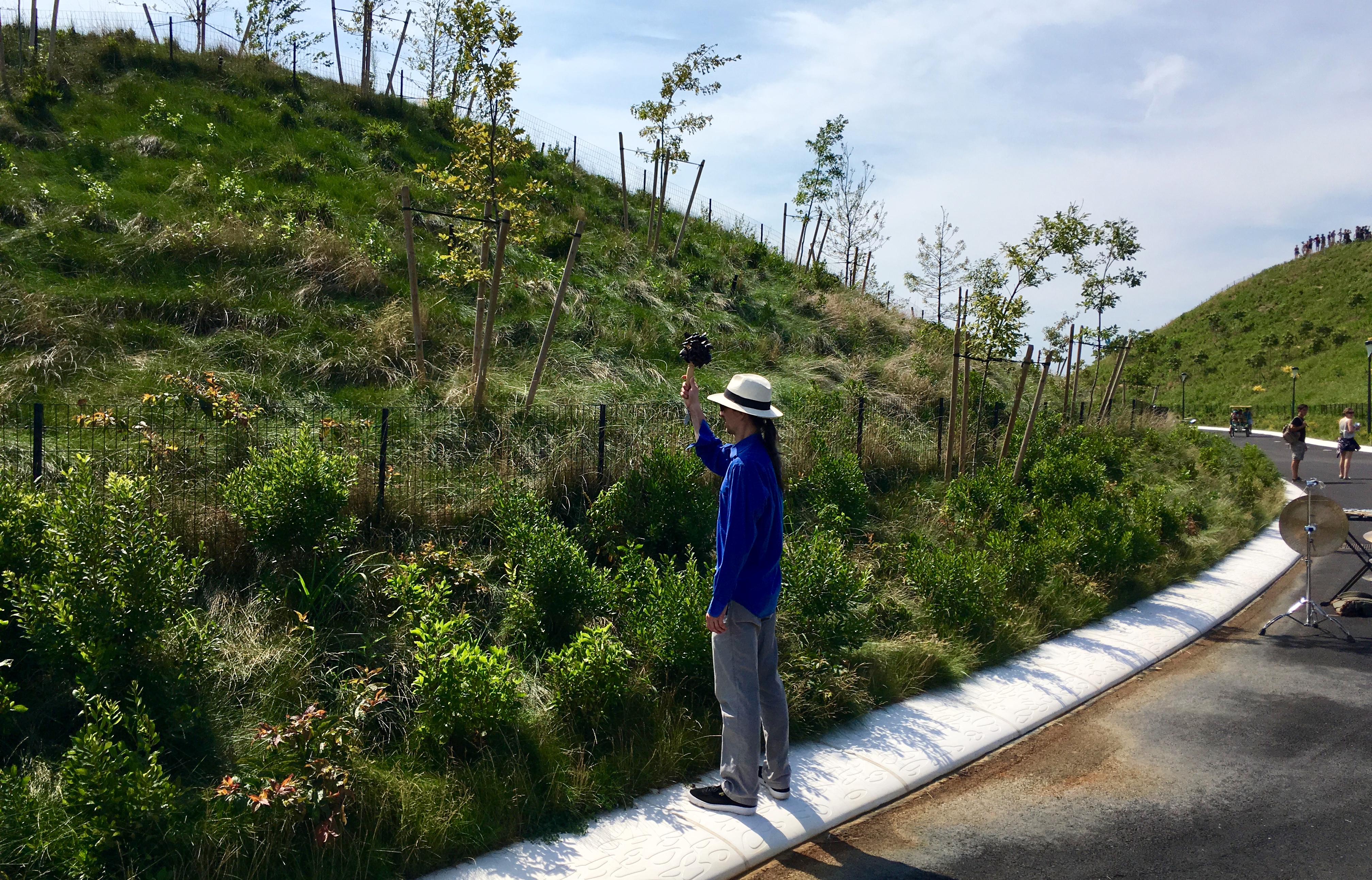 A noted classical soloist recently told me in an interview that there was nothing she found more terrifying than speaking to an audience, with its breach in the fourth wall between the concert stage and audience. Certainly, not every artist possesses the gift to gab. But a number of concert productions and modern pieces have made this blurring of audience-performer boundaries intrinsic to the experience.

At a performance of this large-scale environmental work at Governors Island on Aug. 27 (pictured above), one got sense that much of its appeal involves the lack of formal audience-performer boundaries. With 70-plus percussionists playing a variety of drums, maracas, shells, air horns, glockenspiels and other instruments dispersed over an outdoor landscape – in this case the island’s manmade hills – the performance is not meant to be witnessed from a single, fixed angle. Rather, listeners are encouraged to wander around the musicians, discovering discrete musical moments. Many listeners abided by the social media mantra, “Pics or it didn’t happen,” as a scan for the hashtag #Inuksuit reveals.

All types of guests were in attendance at the July 23rd performance of #inuksuit at #tippetrise #johnlutheradams pic.twitter.com/IF7K2BaRud

Lincoln Center’s White Light Festival will open October 16-19 with “Human Requiem,” an immersive staging of Brahms’s Ein deutsches Requiem re-scored for choir and two pianos. Producer Jochen Sandig encourages the standing audience to mill among the singers of the Rundfunkchor Berlin, thereby dissolving boundaries between performer and audience. This “semi-staging,” which premiered in 2012, has previously called on audience members to put on felt slippers before entering the auditorium, as a way of muffling footsteps. Below is an excerpt:

Groupmuse, the online service that facilitates house parties featuring chamber music performances, has drawn much attention for the way in which it negates standard recital protocol. At a Groupmuse event, classical musicians typically perform in a living room and chat with the audience members seated just inches away. In reporting an article on this “sharing economy” startup last year, I attended performances in an Upper West Side bedroom, a Crown Heights living room and a Masonic Temple in Brooklyn, where a “Rite of Spring Dance Party” took place (complete with a mosh pit). Similar experiences can be found at performances by Opera on Tap and Classical Revolution.

Concerts in Bars and Restaurants

The ongoing, industry-wide movement towards concerts in clubs, bars, restaurants and other nontraditional venues has also played a large part in this trend. To some observers, these productions are about resurrecting bygone, 19th-century practices, wherein Franz Liszt and his ilk frequently spoke to the audience, took requests and flirted with women in the front rows. As the New York Times recently reported, few musicians graduating from conservatories today don’t have at least some experience with this approach.