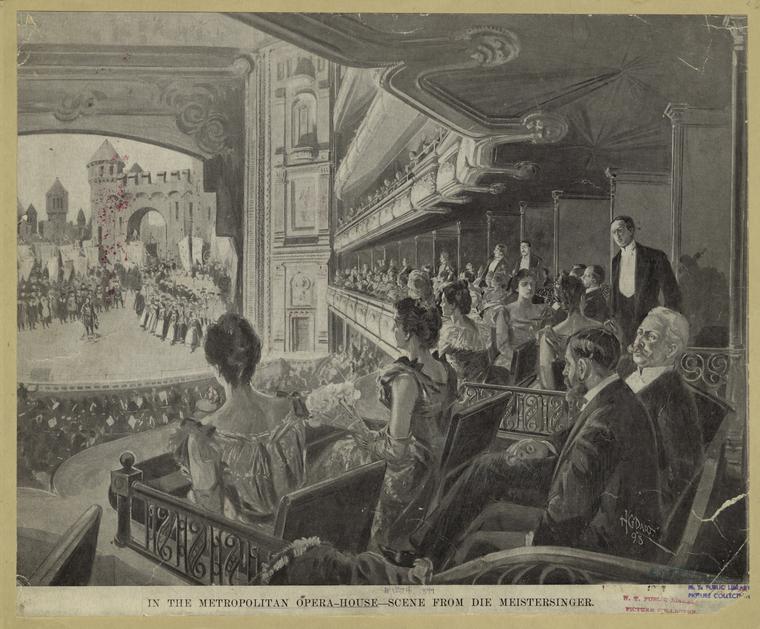 In a widely-circulated column in The Guardian, dated Oct. 14, writer Howard Jacobson argues that opera audiences have become too casual, and that men should wear suits and ties to performances in an effort to “commemorate the specialness of an occasion.” He recounts attending a performance of a Mozart opera in London recently and being the only man in his row wearing a formal suit, while others wandered in sporting gym shoes, jeans and polo shirts.

The column sparked a strong response on social media, especially from those who wish to untether the art form from its ultra-affluent associations. By advocating formal attire, they say, Jacobson reinforces opera’s unfortunate reputation for stuffiness and snobbery. Some took particular affront to his approval of the bejeweled women he witnessed in the London audience, who sported sequined gowns and “killer heels,” while accompanied by more casually-dressed men. The singer Christine Goerke summed up a common reaction on Twitter:

Friends, you come to the opera wearing whatever you want. Last time I checked? *I’m* the one who wears the costume. https://t.co/pFHtXZtIdw

But not every response was negative, and some readers bemoaned that there are too few places in this world to dress up anymore. Wrote one Guardian commenter: “It’s part of the fun of people watching- we can wear sequins, colourful and waist cinching cummerbunds, as well as tunics, skirts, dresses, trousers, feathers, hats, you name it! Dress up, have fun and express ourselves!”

As it happens, opera companies themselves are not silent bystanders in the debate over attire. Some encourage people to dress formally (or too formally?) through attire recommendations on their websites. “There is no dress code at the Met, but a night at the opera can be a great excuse to get dressed up,” the Metropolitan Opera states on its “what to expect” web page, and points potential patrons to its blog, Last Night at the Met, for tips on what to wear. The blog shows a parade of full-length gowns, tuxedo-wearing men, boas and evening gloves.

Other companies seem to straddle a delicate line between “come as you are” and “you’ll feel better if you dress up.” Among them are the Lyric Opera of Chicago, which advises, “weeknights are business casual and attending an opera on a Saturday night is a little dressier,” the Minnesota Opera (which points you to a Pinterest page featuring high-toned “opera fashion“), the Canadian Opera Company (“we advise dressing for comfort, but with flair“), and Dallas Opera (“Business attire is the norm for opera”).

West Coast companies tend to have the most relaxed approach in their online copy. The San Francisco Opera advises: “We don’t have a dress code. Some opera-goers prefer suits and gowns, others jeans. Wear what makes you feel comfortable.” Seattle Opera says the local style is “everything from ball gowns and tuxes to shorts and Birkenstocks” and it doesn’t take a position on which is best. LA Opera is a bit more particular, and points readers to a fashion blog.

Houston Grand Opera wins the prize for the most in-depth fashion advisory, presenting a three-minute video of opera-goers in both tuxes and flannel shirts. The approach is lighthearted and free of judgment.