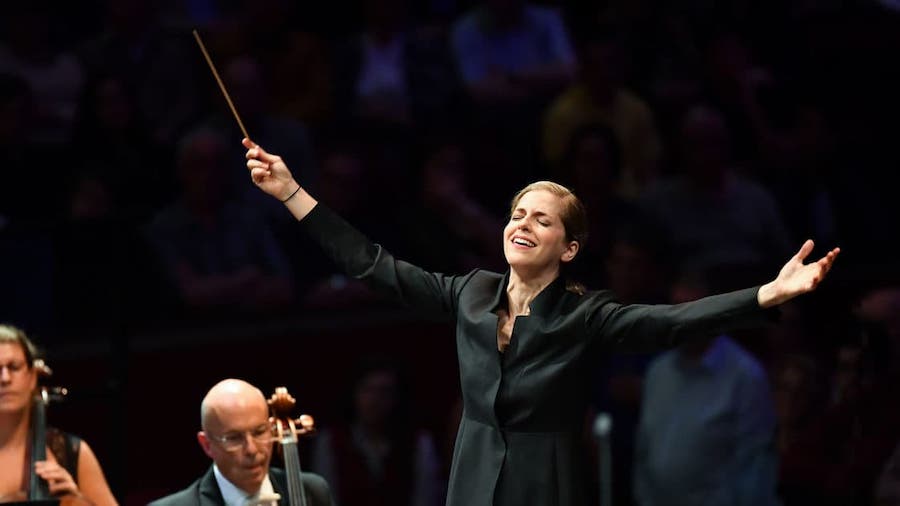 In scanning the calendars of symphony orchestras this season, you may notice that Shostakovich is having a moment. And it’s not just the popular Fifth Symphony that is getting all the attention (though that is certainly making the rounds).

The Boston Symphony is performing the Russian composer’s Symphony No. 2 “To October” (Nov. 21-26), the San Francisco Symphony is featuring the Seventh (Oct. 24-26), the Chicago Symphony has just revived the Eighth (I produce the CSO’s radio broadcasts), Minneapolis is doing the Ninth (Oct. 10-11) and both the Oslo Philharmonic and the Netherlands Radio Philharmonic in Amsterdam are presenting the Tenth over the same weekend (Oct. 11-14). And that’s just scratching the surface.

A common thread among these performances: most are led by a number of exciting young (or young-ish) conductors, including James Gaffigan, Vasily Petrenko, Jader Bignamini and Karina Canellakis. The latter conductor is particularly steeped in the world of Shostakovich this year, leading the aforementioned performances in San Francisco and Amsterdam, followed later by a Tenth with the Orchestre de Paris (Jan. 22-23, 2020) and a Fifth with the Atlanta Symphony (Jan. 30-Feb. 1). I spoke with Canellakis about this for the October issue of BBC Music Magazine. Below are excerpts and outtakes from our conversation, lightly edited for length and clarity.

You’re making your San Francisco Symphony debut with Shostakovich’s wartime Seventh Symphony. How do you access Shostakovich: is it through his gripping personal story, or more through the vast sound world he creates?

It’s a combination. Especially with the Seventh, it’s insane. Most composers didn’t have to deal with so many atrocities and so much nonsense surrounding their work and their artistic process. It’s just ridiculous the sorts of things he had to overcome and he just kept composing through all of that. He slept in the hallway in case he got taken away in the middle of the night. Then, on the other side of things, I’m drawn to the pure visceral aspect of his compositional style. It’s not subtle (laughs). It’s extremely direct, often times overblown or sarcastic.

There are a lot of quotes and poking fun at authority [in his symphonies] and there are aspects that come from his “New Babylon” days when he wrote film music. It’s this kind of silent film music, this ridiculous, over the top kind of can-can. You could picture these old black-and-white, frenzied films that he wrote for at the beginning of his career. You take that and combine it with this style that he developed later, where he could describe the depths of despair in darkness in music.  He could portray that in music better than any other composer that I can think of.

There have long been debates over whether Shostakovich was a Communist party ideologue or a subtle dissident. If you search for “Shostakovich wars” on Google, for instance, it will fetch thousands of entries. What do you think?

I think he was a dissident, one hundred percent. I think he was his own person and, at the end of the day, was a pacifist. It was the same as Benjamin Britten, except that Shostakovich was not in a country were he could file a form like you could in Great Britain saying that you were a conscientious objector. That was not possible under Stalin. You have to look at the reasons that people might have criticized Shostakovich for supposedly going along with what the government wanted. In pieces like in the Fifth Symphony, metaphorically, there was a gun to his head. Certainly, the Eighth Symphony and the post-Stalin symphonies have a completely different feeling and landscape to them.

Your career breakthrough came in 2014, when you conducted Shostakovich’s Eighth as a last-minute substitute for Jaap van Zweden at the Dallas Symphony. What do you remember about that?

That was a huge moment for me. Shostakovich 8 is not a piece that anybody would opt to step into without having had a single rehearsal. So at the time I didn’t feel like ‘Oh, I’m so lucky.’ It was sort of a trial by fire where the only thing that I thought about was taking the orchestra through this journey and also trusting them to do what they had been doing with Van Zweden. But I remember those experiences like they were yesterday.