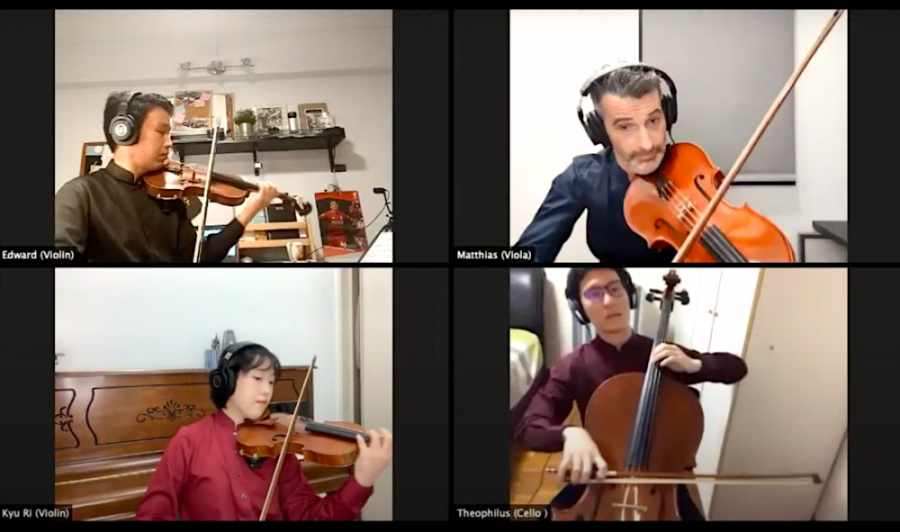 The question has perplexed a lot musicians since the start of social distancing and quarantines: Is it possible to hold an online performance when performers are spread out in remote locations? The presence of latency, or lag, in the video connections makes such collaboration especially difficult. And most video-conferencing platforms (Zoom, Skype, FaceTime) allow only one person to speak or sing at a time.

In the September issue of BBC Music Magazine, I look at a variety of online conferencing tools and ultra-fast networks that aim to overcome these hurdles by reducing latency and improving audio quality. Some of these options have been available for years but are suddenly enjoying a surge in interest as in-person rehearsals have become less practical. The tools include:

JamKazam: Founded in Austin, TX in 2014, this app (desktop and IOS) saw the number of sessions on its service jump from 5,000 a month to 235,000 in early April due to the global lockdowns. The platform, which allows for video and audio conferencing, has hosted evening-length jam sessions, sometimes over hundreds of miles (though generally speaking, the longer the distance the greater the latency). “We have had a very committed community that has played on it regularly for years now,” co-founder and co-CEO Dave Wilson told me. Upgrades are planned that will expand network pathways to make peer-to-peer connections more seamless. In this example, the quartet Barton Strings plays from four different homes in Austin.

Jamulus: Created by the California-based developer Sourceforge, this small, open-source program has drawn some high marks for its ability to reduce (if not entirely eliminate) the latency between users in remote locales. Users include the Singapore-based Concordia String Quartet (pictured above, in a June concert), and the Vierimpuls String Quartet, from Germany. Adrian-Minh Schumacher, cellist in the Vierimpuls, told me about the day-to-day idiosyncrasies of the platform:

But, of course, there are noticeable limitations due to the finite latency, mostly due to day-to-day jitter in internet connection speed and delays. With several years of experience we would say it is more about the ‘good’ and ‘bad’ days how easy or hard it is to play over Jamulus. On good days, we can play anything and have a fantastic time, working on phrasing, tempo, dynamics and all those vital things for creating living music. On bad days, we struggle and start rehearsing slow pieces and intonation, sometimes we have to adapt to the latency event play ‘ahead-of-time’.

JackTrip: This open-source online tool was started in 2004 at Stanford University’s Center for Computer Research in Music and Acoustics and was used for “a lot of concerts, jamming and teaching,” said Dr. Chris Chaffe, the center’s director. “Before sheltering in place, it had been kind of an esoteric practice. Music is fun to play together in the same room. Why would you want to play it in different places? Well here we are.” The Kronos Quartet recently used JackTrip, with its members in remote locations, and with an audience watching from their own screens:

Internet2: This ultra-fast network connects more than 480 universities and research organizations in the U.S. by transmitting huge quantities of data, and thus enabling multi-city “networked performances” and masterclasses. Similar is Géant, a consortium that links 40 national and research networks in Europe. Internet2 has been adopted by a number of music schools, with some of the most active practitioners being the Manhattan School of Music, the Cleveland Institute of Music and the New World Symphony. It is naturally limited by the fact that both end-users must have the proper hardware and connection to fully exploit its capabilities, but at best, it allows for some dramatically low-latency connections. Below is a 2014 performance using Internet2, featuring the Chiara String Quartet, at the University of Nebraska-Lincoln and the Avalon Quartet, 450 miles (720 km) away at Northern Illinois University.

Top Photo: The Concordia Quartet playing from their individual homes. Rehearsed and performed online, the members use Jamulus for low latency audio and Zoom for video.

One Reply to “Long-Distance, Online Performances Without the Latency?”