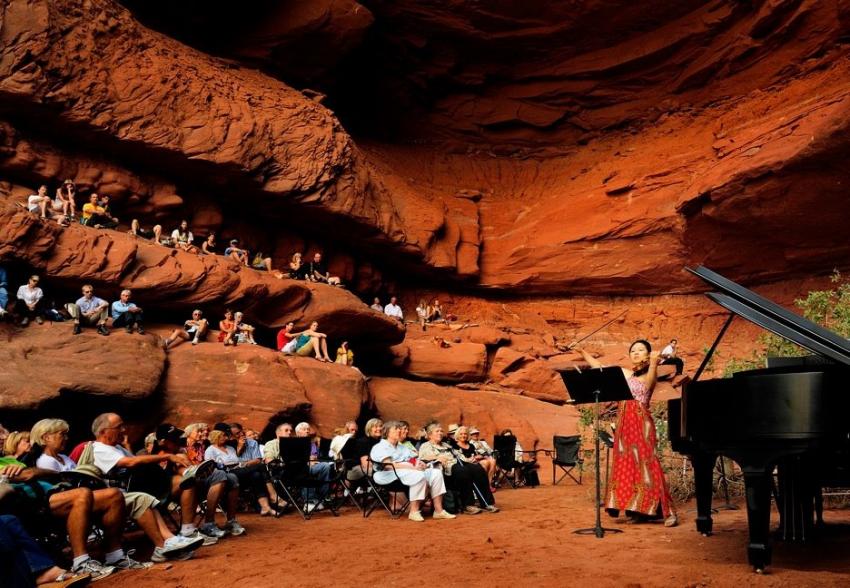 When Gustav Mahler was composing his Symphony No. 3 in Steinbach am Attersee – part of Austria’s spectacular Salzkammergut lake district – the young conductor Bruno Walter paid him a visit. As Walter stepped off the ferry boat, Mahler saw that his guest was gazing up at the cragged, limestone mountains which provided a dramatic backdrop to the lakefront.

“No need to look up there,” Mahler reportedly said. “It’s all in my new symphony!”

In several symphonies Mahler either overtly or indirectly portrayed Europe’s mountain majesty, with evocations of alphorns, rustic folk tunes and the tinkling of cowbells. Other European composers had similar inspirations, from Richard Strauss in his Alpine Symphony to Bela Bartok in “Song of the Mountain Horn,” one of several pieces inspired by Transylvania’s Eastern Carpathian Mountains.

In an article for The Guardian, I look at seven American music festivals that take place in and around America’s national parks, which are collectively celebrating their centennial in 2016. A few of these festivals have commissioned new pieces for the anniversary, bolstering what has been a surprisingly thin repertoire of programmatic works inspired by the nation’s parks (especially if one considers the substantial body of visual art the parks have spawned).

Two lesser-known pieces also deserve exploration. Howard Hanson’s California Forest Play, for solo voices, chorus, dancers, and orchestra, was written in 1920 for open-air performance at the Redwood National Park (it helped him win the American Academy’s Rome Prize though no commercial recordings appear to exist). And Michael Daugherty’s Alligator Alley (2003), is a short piece for symphonic band that pays homage to the creature that populates Florida’s Everglades National Park.

The National Park Service itself has sponsored an artist-in-residence program and this year there are other commissioning efforts taking place across the country. Amid recent reports that the Park Service is hurting for cash, as Congress has refused to increase funding for the system, music and the arts might help in promoting its conservation. Below is a short trailer by the Grand Valley State University New Music Ensemble, which is commissioning eight new works for the centennial.

One Reply to “Unearthing Music Inspired by the U.S. National Parks”