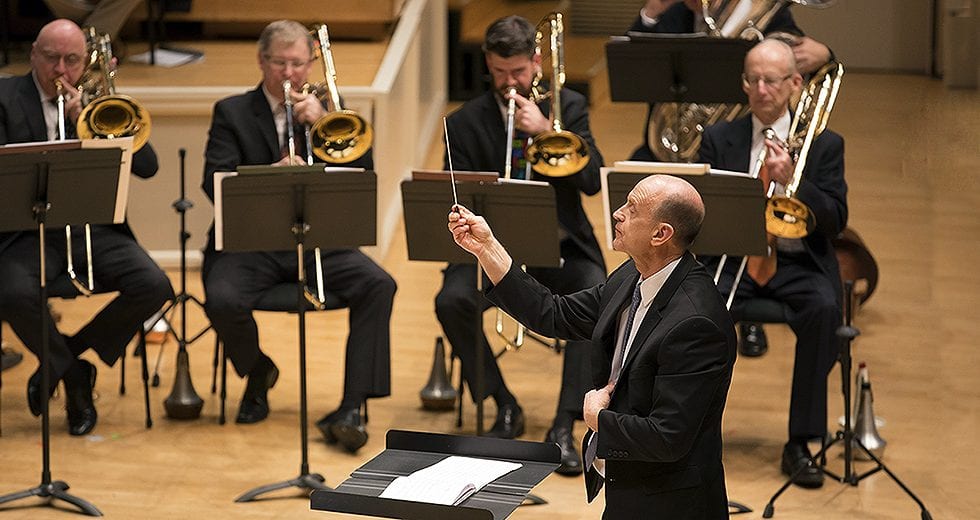 Back in 1991, the Chicago Bulls had clinched their first of six NBA Championships, a Daley was returning to the mayor’s office, and the Chicago Symphony Orchestra was ushering in the Daniel Barenboim era. The successor to Sir Georg Solti arrived at an orchestra with the most celebrated brass section in the world, and one whose character he would help shape over the next 15 years as Music Director.

Like a fortifying wind off Lake Michigan, other changes had recently arrived with the appointments of bass trombone Charles Vernon, in 1986, followed by principal tuba Gene Pokorny and second trombone Mulcahy, both in 1989. Barenboim would preside over some 40 appointments, including those in the entire trumpet section, while pursuing a more lyrical, less overtly muscular brass sound.

“Barenboim wanted more of an elongated lyricism,” says John Hagstrom, who joined the trumpet section in 1996 and was appointed Second Trumpet the following year. “He wanted people to listen to each other. And he wanted something less strident in terms of how notes started. He was interested in the middle of the note. He would often say, ‘As a pianist I would love to be able to do something with my sound once I started but I can’t.’”

In a 2006 appraisal of Barenboim’s tenure, former Chicago Tribune music critic John von Rhein described “a brass sound that had less of the punchy, overbearing brilliance favored by Solti, and that was more on balance with the rest of the orchestra.”

But brass-friendly repertoire did not suddenly disappear from programs, and recordings of Wagner and Richard Strauss remain signposts of the era.

Barenboim described his desire for a carefully balanced brass aesthetic in his memoir, A Life in Music, written with CSO program annotator Phillip Huscher. “The main problem with the brass is, of course, the power of their instruments,” he writes. “A conductor must have profound knowledge of the necessary volume and ‘dosage.’ In other words, if the word ‘crescendo’ is written all over the score, it should not be played by the entire orchestra at the same time, since the weaker instruments will not be heard distinctly — the brass and timpani should start the crescendo later.”

The most significant personnel change of Barenboim’s tenure came when Adolph Herseth relinquished the principal trumpet chair in 2001, after 53 years. On his best nights, the septuagenarian trumpeter could still dazzle audiences, as he did when performing the opening solo in Mahler’s Fifth Symphony at Carnegie Hall in 2000. “He was still disciplined, consistent and prepared,” says Hagstrom. “He represented a certain baseline and, while he could be crabby at times, when it came right down to it, he was really committed. Barenboim valued that.”

Herseth, who was named Musical America’s Instrumentalist of the Year in 1996, also wielded considerable sway within the orchestra, and new brass players deferred to him on aspects of section style and interpretation. Along with Hagstrom, newcomers included Mark Ridenour, who was named assistant principal trumpet, in 1994, and Tage Larsen, appointed fourth/utility trumpet in 2002.

After Herseth’s departure, the principal chair (now named in his honor) was held by Craig Morris (2001-2003), and Christopher Martin (2005-2017), before the Spaniard Esteban Battallán won the position in 2019. Battallán, who played principal in the Hong Kong Philharmonic, did not study in Chicago or cut his teeth in the Chicago Civic Orchestra. But he idolized the CSO Brass as a teenager, after discovering a CD of the orchestra performing Mahler’s First Symphony.

“When I heard that colossal recording, I was astonished,” he told Trumpet Magazine. “That was when I really became aware of wanting to follow the orchestral path, and that I wanted to get to sit down, one day, in Adolph Herseth’s chair.”

Mulcahy views the present-day CSO Brass as the result of a steady refinement process that began under Barenboim and continued with Bernard Haitink, Principal Conductor from 2006 to 2010, and Riccardo Muti, who became Music Director in 2010. “Muti emphasizes an extremely refined sound and a great balance and commitment to the musical line,” he says. “The orchestra is a little bit more sophisticated.

“Now, I will say that there is less visceral, raw energy than there once was. It comes out for select moments in the music, but it’s less pedal to the metal than it would have once been. There’s a place for both approaches. It has evolved as it should.”

For the CSO, the brass remains a tourist draw and a funding magnet: It has been the recipient of a special commissioning fund, which has underwritten several new brass concertos including Jennifer Higdon’s Low Brass Concerto, premiered in 2018. An annual all-brass subscription program at Orchestra Hall is consistently the top-selling event on the CSO calendar, often drawing international visitors. And a CSO Resound recording of the 2010 concert, Chicago Symphony Orchestra Brass Live, offers what second horn James Smelser calls “an un-doctored, accurate sound of the brass.”

Smelser also believes the brass section has maintained its core features even as it benefits from Muti’s expansive, supple approach to phrasing. Mulcahy agrees. “Having a sense of unity is the most key thing,” he says. “There’s a very strong sense that we all belong to one thing and there should be great concordance in the way that we make music together. That is something that we inherited from the glory days of the old CSO Brass, and I think it’s a responsibility that we feel called to respect.”

Disclaimer: I am the producer of the CSO’s national radio series on WFMT. This article was written independently of my work in that role.