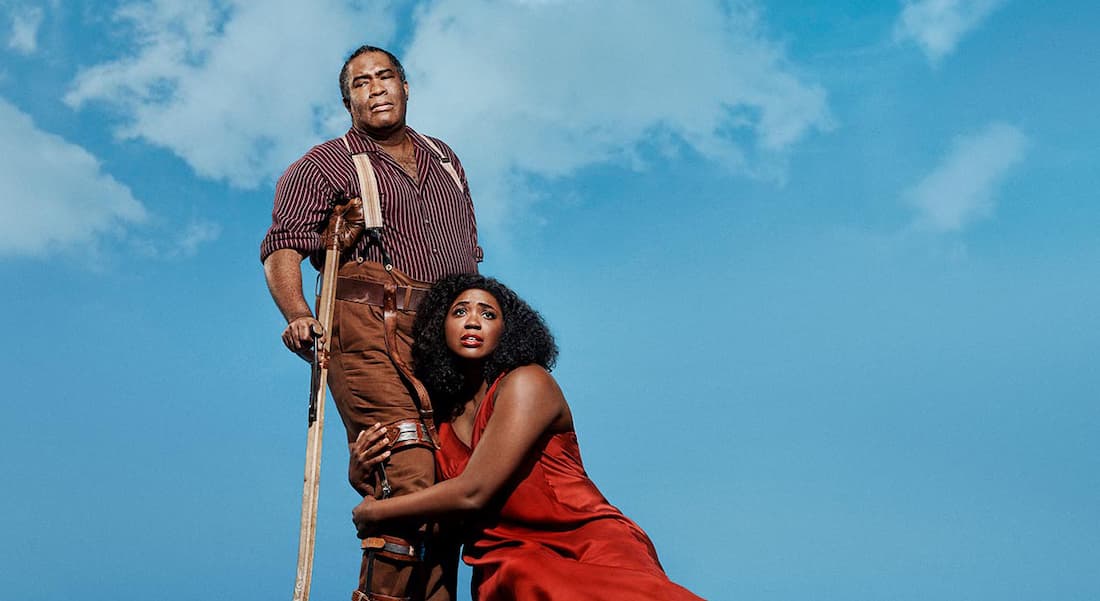 The Gershwins’ Porgy and Bess is returning to the Metropolitan Opera for the first time in 34 years, with the soprano Angel Blue and the bass-baritone Eric Owens in the title roles. In a bit of luxury casting, they’ll be joined by Ryan Speedo Green, Latonia Moore and Denyce Graves, among several other noted singers. A handsome production by James Robinson arrives on September 24 after a well-received run at English National Opera.

A native of the Los Angeles area, Angel Blue has performed at leading opera houses throughout North America and Europe, and made her Met debut in 2017 as Mimi in La Bohème. A former model and beauty queen, she has frequently appeared on BBC channels. I spoke with Angel Blue about the role for the August issue of BBC Music Magazine. Below are excerpts from the Q&A, edited lightly for length and clarity.

Bess is a troubled character, dealing with drug problems and abusive relationships in her life. How do you delve into such a role?

I tried to find commonalities with every woman whose roll I sing. With Bess, she struggles with insecurities. She becomes a part of this community on Catfish Row but she’s never really accepted into the community. That’s one of the things that I do share with her — trying to fit in with whatever that may be in the opera world. If I could talk to Bess, I’d say it’s not really about fitting in as it’s more about embracing who you are and letting that become your truth.

You’ve played Clara in Porgy and Bess at San Francisco Opera and at La Scala. Did that provide any insights into the opera, and ? Did it make it easier to take on Bess having sung Clara?

It makes it easier to sing Bess only because I understand the journey of another character. For example, like Mimì and Musetta [from La Bohème], I’ve sung both rolls [below: watch Mimì’s Act I aria at the Met in 2017]. I feel like the journey of Clara, number one, is very short compared to Bess’ journey and it’s entirely different. They don’t necessarily go through the opera together and I’ve always known that she is older than Clara. But I see the opera from two different vantage points and that has helped. Last year when I song my first Bess in Seattle, at Seattle Opera, I feel like it gave me more insight into what other characters in the opera are feeling and that’s helped me to shape who I wanted my Bess to be.

Some critics have suggested that Porgy and Bess has contemporary relevance in the way it addresses social ills: Bess’s drug habit anticipates the U.S. opioid crisis, for instance, and Crown’s bullying resonates with the #MetToo movement. Do you agree with such readings?

I think current events can affect how something is staged or put together but I like to think that these stories that were singing, which are hundreds of years old (though Porgy and Bess is only 84) are universal. They stand the test of time because this is just life and this is what people do. You have great people in opera, people who think that they’re fighting for a greater good, and then you have the villains like Scarpia or Crown. That’s just human nature and that’s why these stories are so relevant today.

Bess is going through the same thing that a lot of people go through. A lot of people deal with drugs. Even in our own profession I’ve seen different colleagues be addicted to alcohol or addicted to certain drugs. All of that is meaningful because, as humans, we are always struggling with something. There’s always something that we’re dealing with.

How do you feel about working with Eric Owens as Porgy?

I have a very interesting story that I’m so excited to share. In 2009, my first professional job coming out of the young artist program was to sing Clara at San Francisco Opera. Eric was singing his first Porgy at that performance in that same production. When we were in Amsterdam doing the photo shoot [for the Met], I said, “Can you believe this is my tenth year of singing professionally when we get up to sing Porgy and Bess?” Then he goes on say how old he is. And I’m like, “You’re not that old. Stop it!” He’s a lovely colleague.