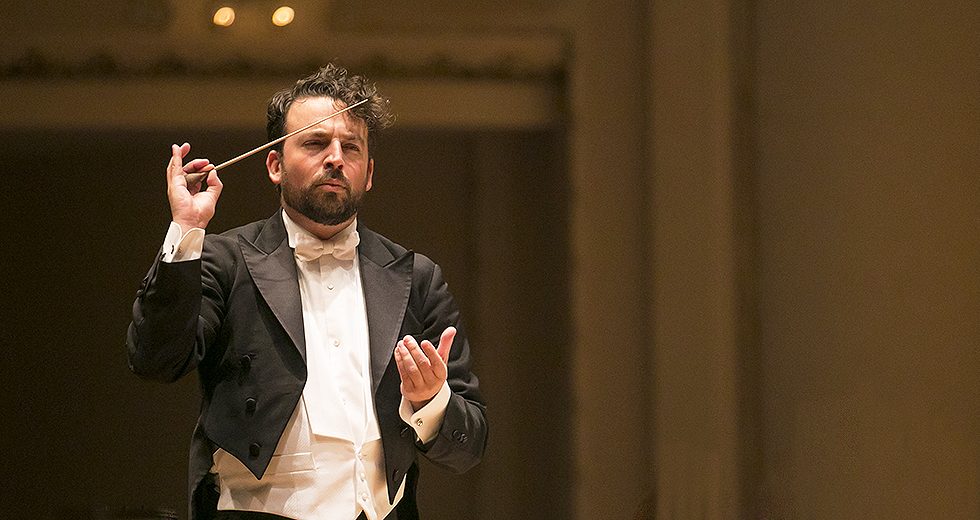 Guest conductor James Gaffigan leads the Chicago Symphony Orchestra in the Symphonic Suite from On the Waterfront, Leonard Bernstein’s only film score. The program continues with James Ehnes as soloist in Barber’s Violin Concerto (plus an encore from Bach’s Sonata No. 3 in C Major) along with Rachmaninov’s Symphonic Dances. Beethoven’s Symphony No. 8 led by the CSO’s ninth music director, Sir Georg Solti, closes the broadcast.

More about the On The Waterfront Suite:

As the Leonard Bernstein centennial inspires tribute concerts around the globe, it’s reported that he’ll be the subject of two upcoming Hollywood biopics. But this won’t be Hollywood’s first encounter with the late composer and conductor. In 1954, Bernstein wrote the score for Elia Kazan’s crime drama, On the Waterfront. Filmed on the docks of Hoboken, New Jersey, the gritty tale starred Marlon Brando as Terry Malloy, a troubled longshoreman who battles a corrupt union boss.

On the Waterfront was nominated for twelve Academy Awards and won eight, including Best Picture. Bernstein’s score was nominated for an Oscar, and though it didn’t win, it’s been widely admired: The American Film Institute ranks it number 22 on a list of top American film scores.

The suite opens with a stark French horn solo, and builds to a rumbling fight sequence, followed by a tender love theme. Throughout, it underscores Kazan’s themes of corruption and heroism.

More about the CSO Radio Broadcasts

This program, which will be available until July 15, 2021, is part of the CSO’s weekly radio broadcasts, recorded live at Chicago’s Orchestra Hall. Distributed by WFMT, they reach more than 250,000 listeners every week.